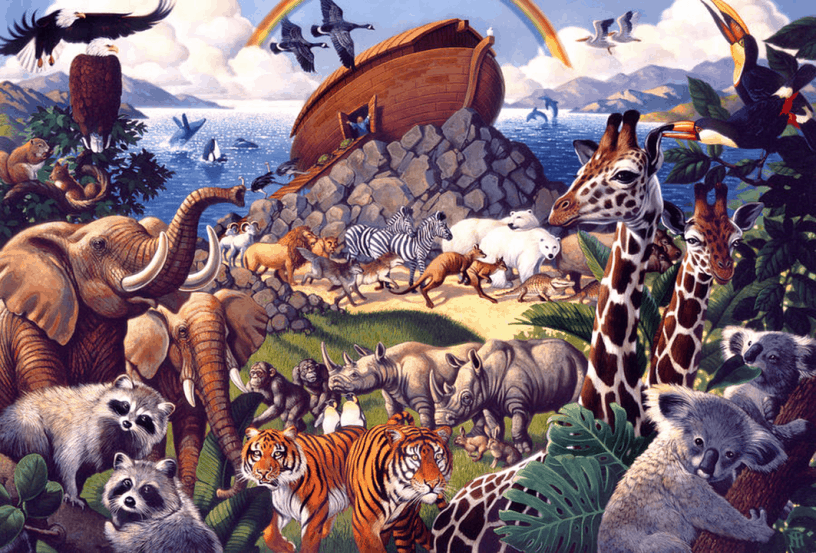 Water is necessary for life, but also destroys in catastrophic events. In the story of Noah and the Ark, God decides that it is time for a do-over; that the earth is filled with such evil and lost relationships with God that God vows to start again. God makes a covenant to be faithful after the flood, a covenant in which God is the only party that can and must fulfill the covenant.

After Noah was five hundred years old, Noah became the father of Shem, Ham, and Japheth.

The Wickedness of Humankind

When people began to multiply on the face of the ground, and daughters were born to them, the sons of God saw that they were fair; and they took wives for themselves of all that they chose. Then the Lord said, “My spirit shall not abide in mortals forever, for they are flesh; their days shall be one hundred twenty years.” The Nephilim were on the earth in those days—and also afterward—when the sons of God went in to the daughters of humans, who bore children to them. These were the heroes that were of old, warriors of renown.

The Lord saw that the wickedness of humankind was great in the earth, and that every inclination of the thoughts of their hearts was only evil continually. And the Lord was sorry that he had made humankind on the earth, and it grieved him to his heart. So the Lord said, “I will blot out from the earth the human beings I have created—people together with animals and creeping things and birds of the air, for I am sorry that I have made them.” But Noah found favor in the sight of the Lord.

These are the descendants of Noah. Noah was a righteous man, blameless in his generation; Noah walked with God. And Noah had three sons, Shem, Ham, and Japheth.

Now the earth was corrupt in God’s sight, and the earth was filled with violence. And God saw that the earth was corrupt; for all flesh had corrupted its ways upon the earth. And God said to Noah, “I have determined to make an end of all flesh, for the earth is filled with violence because of them; now I am going to destroy them along with the earth. Make yourself an ark of cypress wood; make rooms in the ark, and cover it inside and out with pitch. This is how you are to make it: the length of the ark three hundred cubits, its width fifty cubits, and its height thirty cubits. Make a roof for the ark, and finish it to a cubit above; and put the door of the ark in its side; make it with lower, second, and third decks. For my part, I am going to bring a flood of waters on the earth, to destroy from under heaven all flesh in which is the breath of life; everything that is on the earth shall die. But I will establish my covenant with you; and you shall come into the ark, you, your sons, your wife, and your sons’ wives with you. And of every living thing, of all flesh, you shall bring two of every kind into the ark, to keep them alive with you; they shall be male and female. Of the birds according to their kinds, and of the animals according to their kinds, of every creeping thing of the ground according to its kind, two of every kind shall come in to you, to keep them alive. Also take with you every kind of food that is eaten, and store it up; and it shall serve as food for you and for them.” Noah did this; he did all that God commanded him.

Then the Lord said to Noah, “Go into the ark, you and all your household, for I have seen that you alone are righteous before me in this generation. Take with you seven pairs of all clean animals, the male and its mate; and a pair of the animals that are not clean, the male and its mate; and seven pairs of the birds of the air also, male and female, to keep their kind alive on the face of all the earth. For in seven days I will send rain on the earth for forty days and forty nights; and every living thing that I have made I will blot out from the face of the ground.” And Noah did all that the Lord had commanded him.

Noah was six hundred years old when the flood of waters came on the earth. And Noah with his sons and his wife and his sons’ wives went into the ark to escape the waters of the flood. Of clean animals, and of animals that are not clean, and of birds, and of everything that creeps on the ground, two and two, male and female, went into the ark with Noah, as God had commanded Noah. And after seven days the waters of the flood came on the earth.

In the six hundredth year of Noah’s life, in the second month, on the seventeenth day of the month, on that day all the fountains of the great deep burst forth, and the windows of the heavens were opened. The rain fell on the earth forty days and forty nights. On the very same day Noah with his sons, Shem and Ham and Japheth, and Noah’s wife and the three wives of his sons entered the ark, they and every wild animal of every kind, and all domestic animals of every kind, and every creeping thing that creeps on the earth, and every bird of every kind—every bird, every winged creature. They went into the ark with Noah, two and two of all flesh in which there was the breath of life. And those that entered, male and female of all flesh, went in as God had commanded him; and the Lord shut him in.

But God remembered Noah and all the wild animals and all the domestic animals that were with him in the ark. And God made a wind blow over the earth, and the waters subsided; the fountains of the deep and the windows of the heavens were closed, the rain from the heavens was restrained, and the waters gradually receded from the earth. At the end of one hundred fifty days the waters had abated; and in the seventh month, on the seventeenth day of the month, the ark came to rest on the mountains of Ararat. The waters continued to abate until the tenth month; in the tenth month, on the first day of the month, the tops of the mountains appeared.

At the end of forty days Noah opened the window of the ark that he had made and sent out the raven; and it went to and fro until the waters were dried up from the earth. Then he sent out the dove from him, to see if the waters had subsided from the face of the ground; but the dove found no place to set its foot, and it returned to him to the ark, for the waters were still on the face of the whole earth. So he put out his hand and took it and brought it into the ark with him. He waited another seven days, and again he sent out the dove from the ark; and the dove came back to him in the evening, and there in its beak was a freshly plucked olive leaf; so Noah knew that the waters had subsided from the earth. Then he waited another seven days, and sent out the dove; and it did not return to him any more.

In the six hundred first year, in the first month, on the first day of the month, the waters were dried up from the earth; and Noah removed the covering of the ark, and looked, and saw that the face of the ground was drying. In the second month, on the twenty-seventh day of the month, the earth was dry. Then God said to Noah, “Go out of the ark, you and your wife, and your sons and your sons’ wives with you. Bring out with you every living thing that is with you of all flesh—birds and animals and every creeping thing that creeps on the earth—so that they may abound on the earth, and be fruitful and multiply on the earth.” So Noah went out with his sons and his wife and his sons’ wives. And every animal, every creeping thing, and every bird, everything that moves on the earth, went out of the ark by families.

Then Noah built an altar to the Lord, and took of every clean animal and of every clean bird, and offered burnt offerings on the altar. And when the Lord smelled the pleasing odor, the Lord said in his heart, “I will never again curse the ground because of humankind, for the inclination of the human heart is evil from youth; nor will I ever again destroy every living creature as I have done.

As long as the earth endures,
seedtime and harvest, cold and heat,
summer and winter, day and night,
shall not cease.”

The Covenant with Noah

God blessed Noah and his sons, and said to them, “Be fruitful and multiply, and fill the earth. The fear and dread of you shall rest on every animal of the earth, and on every bird of the air, on everything that creeps on the ground, and on all the fish of the sea; into your hand they are delivered. Every moving thing that lives shall be food for you; and just as I gave you the green plants, I give you everything. Only, you shall not eat flesh with its life, that is, its blood. For your own lifeblood I will surely require a reckoning: from every animal I will require it and from human beings, each one for the blood of another, I will require a reckoning for human life.

Whoever sheds the blood of a human,
by a human shall that person’s blood be shed;
for in his own image
God made humankind.

Noah and His Sons

The sons of Noah who went out of the ark were Shem, Ham, and Japheth. Ham was the father of Canaan. These three were the sons of Noah; and from these the whole earth was peopled.

Noah, a man of the soil, was the first to plant a vineyard. He drank some of the wine and became drunk, and he lay uncovered in his tent. And Ham, the father of Canaan, saw the nakedness of his father, and told his two brothers outside. Then Shem and Japheth took a garment, laid it on both their shoulders, and walked backward and covered the nakedness of their father; their faces were turned away, and they did not see their father’s nakedness. When Noah awoke from his wine and knew what his youngest son had done to him, he said,

“Cursed be Canaan;
lowest of slaves shall he be to his brothers.”

These are the descendants of Noah’s sons, Shem, Ham, and Japheth; children were born to them after the flood.