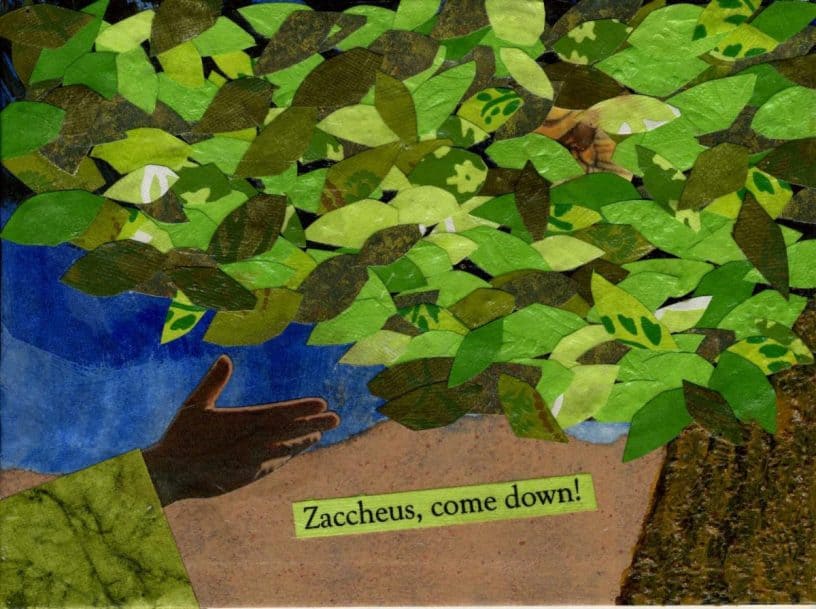 Children in your life are probably familiar with Gru, the main character in the “Despicable Me” animated movie franchise.

Gru is a wicked person, who delights in making other people suffer and taking things that belong to others. In the first movie in the series, he plots to steal…the moon!

In this week’s table story, Zacchaeus is a despicable man. (Chief tax-collectors were not employed by the IRS.) He was a Jewish man who collected taxes for the Roman oppressors. So he was a traitor to the political cause.

Luke 19:1-5
Jesus entered Jericho and was passing through it. A man was there named Zacchaeus; he was a chief tax-collector and was rich. He was trying to see who Jesus was, but on account of the crowd he could not, because he was short in stature. So he ran ahead and climbed a sycamore tree to see him, because he was going to pass that way. When Jesus came to the place, he looked up and said to him, ‘Zacchaeus, hurry and come down; for I must stay at your house today.’

We also read that Zacchaeus was wealthy. And surprise, surprise, how did a Roman tax collector get wealthy? By extortion and embezzlement. By taking advantage of the elderly, by exploiting the working poor, and by taking care of his cronies. There’s an unspoken assumption of corruption here. He’s despicable.

Despite his despicable nature…Jesus seeks him out. In a large crowd, Jesus notices the traitor who climbed a tree to get a better look.

Jesus invites himself to dinner at this man’s home!

-Who is Jesus that he wants to sit at the tables of people like this?
-What might Jesus learn at this table that he couldn’t learn at any other?

Before Jesus is arrested, the worst complaint the religious authorities can make against him is this: “He welcomes sinners and eats with them.” Luke 15:2

Yes, Jesus welcomes sinners — and supplies grace and forgiveness — for all of us!

In the name of God who prepares Tables,
Pastor Bonnie Wilcox

NOTE: Tuesday’s Young at Heart event (March 17) has been cancelled.