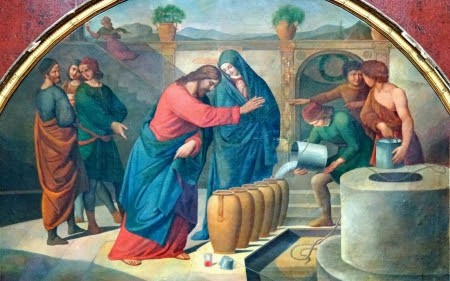 John 12:1-10
On the third day there was a wedding in Cana of Galilee, and the mother of Jesus was there. Jesus and his disciples had also been invited to the wedding. When the wine gave out, the mother of Jesus said to him, ‘They have no wine.’ His mother said to the servants, ‘Do whatever he tells you.’And Jesus said to her, ‘Woman, what concern is that to you and to me? My hour has not yet come.’

Now standing there were six stone water-jars for the Jewish rites of purification, each holding twenty or thirty gallons. Jesus said to them, ‘Fill the jars with water.’ And they filled them up to the brim. He said to them, ‘Now draw some out, and take it to the chief steward.’ So they took it.

When the steward tasted the water that had become wine, and did not know where it came from (though the servants who had drawn the water knew), the steward called the bridegroom and said to him, ‘Everyone serves the good wine first, and then the inferior wine after the guests have become drunk. But you have kept the good wine until now.’

Jesus did this, the first of his signs, in Cana of Galilee, and revealed his glory; and his disciples believed in him.

Mary — and Jesus — Save the Party!

Jesus’ mother, Mary, plays a big part in this story. She notices the problem, and believes her son can do something about it. Mary must be persistent with Jesus. She also instills trust in the servants and encourages their obedience to Jesus.

For today, consider especially this: Mary tells the right person. John’s Gospel doesn’t include any stories of Jesus’ birth. No angelic annunciations. No baby in a manger. No prophetic words or portentous stars.

But the Mary John describes still knows who her son is. She knows what he’s capable of, and she trusts that he alone can meet the need she perceives.

We ought to admire her belief in Jesus, as both her son, and the Son of God.

She brings her distress to Jesus. Given her thirty-year history with him, given the relationship they’ve cultivated together, she is as certain of his ability and his generosity as she is of the need itself.

In the name of God who prepares Tables,
Pastor Bonnie Wilcox