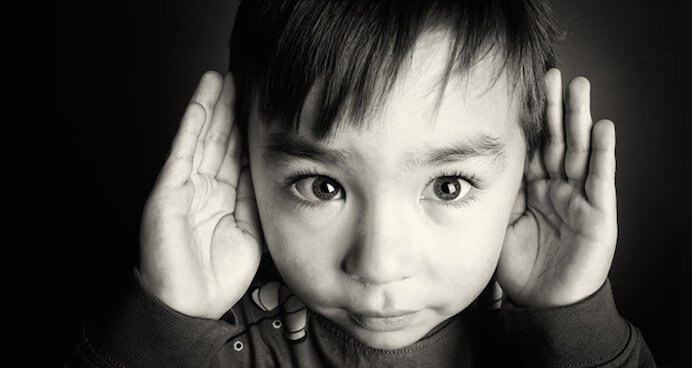 Now the boy Samuel was ministering to the Lord under Eli. The word of the Lord was rare in those days; visions were not widespread.

Now the Lord came and stood there, calling as before, “Samuel! Samuel!” And Samuel said, “Speak, for your servant is listening.” Then the Lord said to Samuel, “See, I am about to do something in Israel that will make both ears of anyone who hears of it tingle. On that day I will fulfill against Eli all that I have spoken concerning his house, from beginning to end. For I have told him that I am about to punish his house forever, for the iniquity that he knew, because his sons were blaspheming God, and he did not restrain them. Therefore I swear to the house of Eli that the iniquity of Eli’s house shall not be expiated by sacrifice or offering forever.”

Samuel lay there until morning; then he opened the doors of the house of the Lord. Samuel was afraid to tell the vision to Eli. But Eli called Samuel and said, “Samuel, my son.” He said, “Here I am.” Eli said, “What was it that he told you? Do not hide it from me. May God do so to you and more also, if you hide anything from me of all that he told you.” So Samuel told him everything and hid nothing from him. Then he said, “It is the Lord; let him do what seems good to him.”

As Samuel grew up, the Lord was with him and let none of his words fall to the ground. And all Israel from Dan to Beer-sheba knew that Samuel was a trustworthy prophet of the Lord. The Lord continued to appear at Shiloh, for the Lord revealed himself to Samuel at Shiloh by the word of the Lord.

Hearing God is not easy but it is possible. Here are ten ways that will enhance your ability to hear
God’s voice. I am using the story of God speaking to Samuel (1 Samuel 3:1 -10) as the illustration of
these ten points.

10. Listen to your conscience.
For everyone has a conscience, and this is the Spirit of God telling you right from wrong. The more you ignore your conscience and act contrary to it, the less you hear it. But you do know right from wrong, and you cannot deny it. Eli clearly knew this, for when Samuel told him God’s word of judgment against him and his sons, Eli knew that he had gone against his conscience in not disciplining his sons and teaching them what was right.

9. Be where God is, not where God is not.
Although God is everywhere, there are some places where God is more clearly present than in others. It is all about location, location, location. Physical location matters, such as in the church sanctuary where God has met you before or in your favorite chair where your Bible is near and there is a candle or a religious symbol. These remind us of God. Note that Samuel was in a most holy place—in the presence of the ark of the covenant and the lamp of God—when and where God spoke to him. Emotional location matters. Fear, worry, and anger are the emotions the evil one uses to turn our focus away from God. Until these are given to God, it is extremely difficult to hear God. Spiritual location matters. The sins of envy, hate, vengeance, bitterness, non-forgiveness, and, especially, pride are also  influences of the evil one that make it nearly impossible to hear God.

8. Write it down later.
I do this after my prayer time. This practice helps me to remember, to clarify, and to amplify what was said. Another way to practice hearing is to take a Scripture passage, read it, discern what God is saying, and then begin to write a letter to yourself from God in God’s voice. My wife Carol has done this and found it to be a deeply enriching spiritual practice.

7. Confirm.
Confirm what was heard with a Christian mentor or friend, someone who has spiritual maturity. I reflect on what I understand God has said to me with my spiritua l director, my pastoral mentor, and my pastoral reunion group. Each of these helps me to discern what is of God and what is not. Notice that Samuel did this with Eli. Eli was able to confirm God’s word to Samuel, for Eli knew the nature and character of God, and therefore knew that the word  Samuel heard was consistent with God’s will and ways. And, Eli knew it was true for God had already told him the same thing.

6. Use the Scriptures.
The Scriptures are the time-tested, historically approved, and authoritative Word of God. There is nothing that God will say to us personally that is against what God has already stated in the Scriptures. God may speak to us to amplify, build upon, clarify, or personalize what is already stated in the Scriptures, but it is useless for us to seek to hear God say something different from what God has already said. For that reason it is important to know God’s word as thoroughly as possible. And, one of the primary ways that God speaks is through revelation, understanding, and interpretation of the Scriptures. Our reflection on the story of Samuel is an example of this common spiritual practice.

5. Put your relationship with God in its proper role.
Notice that Samuel is instructed to say, “Speak Lord, for your servant is listening.” God is the Lord. We are God’s servants. (To be technically correct we should translate the word “servant” as “slave.”) Servants, or slaves, have only one choice, to obey or not to obey. Very often the problem with hearing God is that we want to be the person in control. We want to be the lord, the boss, the one in charge. Which, of course, is the original sin within us all. Furthermore, we have all had bosses, leaders, and rulers who have misused their authority, sometimes a little and s ometimes greatly. We therefore believe the lie that God operates in the same way and thus cannot be trusted. We really have no experience of hearing someone speak who never lies, never manipulates, never flatters, and always
has only our best interests at heart. When we take our proper role and listen to our Lord, our hearts and ears are open to hearing God.

4. Shut up.
This is perhaps hardest of all, for our world is filled with noise that drowns out the voice of God. Many times this is deliberate on our part, for we really do not want to hear God. All too often I hear people speak a torrent of words to God, quit speaking, and go on to something else. They never actually wait to hear God respond. Why do we do that? We do not do that with anyone else with whom we have conversation. Indeed, it is my practice to immediately stop speaking whenever anyone interrupts me, for I have found that at the moment of their interruption they have stopped listening. Rarely will that person ever come back and ask, “What were you about to say?’ All of the great spiritual masters will tell you: Be quiet, be still, be alone . It is in solitude and silence that God speaks. Notice that Samuel was lying quietly in the dark when he heard God speaking.

3. Listen.
Samuel said, “Speak, for your servant is listening.” Listening is an art, and never more so than when listening to God’s voice. We use the phrase “listening to God” but God speaks in ways other than audibly. It is a thought that crosses your mind, an unexpected insight, a flash of understanding, a moment of revelation, a burst of  understanding, a feeling of comfort, a sense of God’s presence, and awareness of the nearness of the heart of Jesus. God’s voice sounds different and has a distinctive tone.

Just like you can hear your mother’s voice out of a cacophony of other voices, so we can learn to discern God’s voice from all the others. Martin Luther describes the other voices that we can hear as being “the world, the devil, and our sinful self.” For example, in my life when I hear a word—a thought in my mind—that says, “You need to be more successful,” I know that it is the values of the world speaking. The voice in my head that says, “Hurry, hurry, hurry; Do more; Be faster; Accomplish more;” is for me the voice of the evil one. My sinful self screams at me and says, “You are unlovable.” Contrary to those voices I hear God say, “Focus on being faithful to me and leave the results to me. Be still and know that I am God. You are my beloved son and with you I am well pleased.” Notice that it took four tries for Samuel to learn to tell the difference between God’s voice and Eli’s voice. Similarly, it takes a long time to discern how to “hear” God. It took you years to learn to distinguish meaning out of the babble of sounds that you heard as an infant. But you did learn to recognize human speech. You can learn to recognize God’s speech.

2. Have Faith.
Ultimately, of course, you cannot prove that it is God speaking. It takes faith to trust that flash of insight was actually God bringing you a revelation. It takes faith to go and visit your neighbor because this unexpected thought that, “You know I really should go visit my neighbor,” is really God giving you direction. It takes faith to say to another, “I sense that your bitterness towards ‘Sally’ is poisoning your relationship with ‘Harry.’ Can you let go of your root of bitterness, confess your sin, and ask the Holy Spirit to fill that place with God’s presence instead?” I actually had a spiritual mentor say the is to me, and in a rush of insight and clarity I realized this was true, did what was suggested, and found myself living in new freedom.

Faith is believing that the voice you have heard is God’s and then to act accordingly. I have found that I do not always do this correctly. Sometimes I have a mistaken understanding of God’s voice, but I learn from my mistakes and continue to grow in my understanding of what God says.

Finally, and simply, to hear God’s voice, ask God to speak. Say, “Speak Lord, for your servant is
listening.”

Contrary to what most people think, God wants to speak to us and God is speaking to us all the time. We are simply deaf to what God is saying or not paying attention. We have not learned God’s language or are too impatient and give up listening at the very moment that God begins to speak.

In the Gospel of John he begins by saying, “In the beginning was the Word and the Word was with God and the Word was God…and the Word became flesh and lived among us…No one has ever seen God, it is God the only Son who is close to the Father’s heart who has made God known.” The incredible miracle of God becoming human was so that we could see God, know God, and hear God. Through Jesus’ death every hindrance to our relationship with God and all that separate us from God was removed. The Holy Spirit, through the Risen Jesus, connects us with God. We have merely to ask.