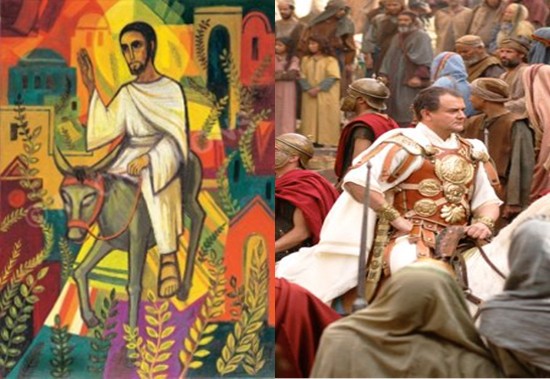 The next day the great crowd that had come to the festival heard that Jesus was coming to Jerusalem. So they took branches of palm trees and went out to meet him, shouting,

“Hosanna!
Blessed is the one who comes in the name of the Lord—
the King of Israel!”

Jesus found a young donkey and sat on it; as it is written:

“Do not be afraid, daughter of Zion.
Look, your king is coming,
sitting on a donkey’s colt!”

His disciples did not understand these things at first; but when Jesus was glorified, then they remembered that these things had been written of him and had been done to him. So the crowd that had been with him when he called Lazarus out of the tomb and raised him from the dead continued to testify.a] It was also because they heard that he had performed this sign that the crowd went to meet him. The Pharisees then said to one another, “You see, you can do nothing. Look, the world has gone after him!”

Some Greeks Wish to See Jesus

Now among those who went up to worship at the festival were some Greeks. They came to Philip, who was from Bethsaida in Galilee, and said to him, “Sir, we wish to see Jesus.” Philip went and told Andrew; then Andrew and Philip went and told Jesus. Jesus answered them, “The hour has come for the Son of Man to be glorified. Very truly, I tell you, unless a grain of wheat falls into the earth and dies, it remains just a single grain; but if it dies, it bears much fruit. Those who love their life lose it, and those who hate their life in this world will keep it for eternal life. Whoever serves me must follow me, and where I am, there will my servant be also. Whoever serves me, the Father will honor.

Jesus Speaks about His Death

“Now my soul is troubled. And what should I say—‘Father, save me from this hour’? No, it is for this reason that I have come to this hour.